My first experience was on an ATV in Thailand. In a small group of 6 folks we met on a kind parking. The coach gave us out a helmet and told something about us the vehicles.
He then explained to us in English, how to give gas and brake. That is the theory. And then it started.

First, we were on the court practicing something. About 10 times we turned our laps, to make us familiar with the Quad. The women in our group were particularly motivated. For me it worked right off the bat pretty well. The force application while driving is not to be sneezed at.

Then the coach escorted us into the forest, where a challenging ATV route with many hills, puddles, curves and small departures was prepared ski. In the first round of respect was still quite high. Sometimes there were two ways, a harmless and a daring. First, I chose the first option, later I rose to the second order.

After the first round, the coach stopped and we were able to independently depart rounds

. From time to time it was more fun. Especially the departures- and driveways came well. And the speed was always higher. However, led also to arrogance. It happened, that I did not get some curves and came off the track. I could save myself on track again, others had to be taken with assistance from the situation.

Finally one goes so slowly, the force and the soreness gets the upper hand. But it was great fun. Unfortunately, this was only a defined distance. It made anticipation for a proper quad tour in Germany.

This was held in the Rheinsberg area near Berlin. The vehicles were much better 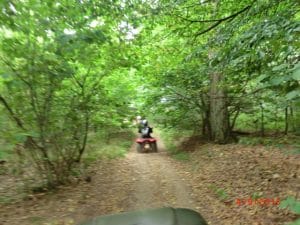 maintained and cleaner. The practice rounds on a small meadows were the hardest. Then we went out onto the small road. After a few meters we crossed the meadow. Driving was easy. You had to pay attention only to the vehicle in front and could otherwise enjoy nature.

Alternately went through forests, where you could smell the wood, grasslands, dirt tracks and even sand and mud. Always so after 45 minutes it was a little exhausting with the hand position. But the tour guide has the feeling and puts a time breaks, where there were snacks and coffee. Also, you can learn a lot about the area. We also had wonderful weather.

Customer opinions for the quad tour in the Lueneburg Heath in the Bergen area / Celle.

Send us your reviews!

The general voucher for all quad tours of our portal - shipping via email or mail within 24 Hours.
5 Years of validity !

You can redeem your voucher here:

In addition to our contact form and by email, we can also be reached by phone:

You will receive vouchers from us within 24 hours by e-mail, or. send by letter immediately.
Special requests and group requests can be addressed to us via our contact form.

The vouchers can (unless otherwise specified ) optional immediately by mail to the self-printed out and immediately redeemed.

Quad tours in times of Corona.
What you should know by now:

All information on the following topics

you will find this on our
-information page